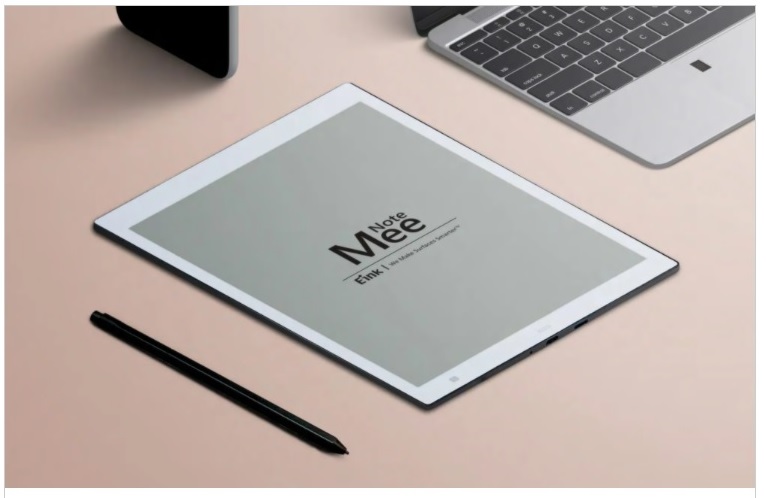 E INK has just unveiled the Meenote, which stands for ‘mobile expandable epaper notebook.’ It features a a 10.3 inch screen,

which will easily read A5 documents. It has a resolution of 1872×1404 and has EMR technology, so it supports a stylus.

This is used to take notes, freehand draw or make annotations. This is a not a proof of concept, but a complete and finished

product. It is available for OEM’s to manufacture and produce. Whatever company wants to take this to market will not have

to do any RND at all, and since there is no software, it will be cheap and easy.

The Meenote is quite different from most other 10.3 inch E INK devices on the market. It does not have a system on on chip

or many internal components, such as RAM, storage or a battery. It was designed to be tethered via USB to an Android or

Windows device. It can connect to smartphones, tablets, laptops or computers. It is equipped with EINKS TCON 1000,

which drives the display and processes signals. The hardware architecture is simple and cost conscious.

You can think of this device as being able to mirror what is on the computer screen and with the stylus, can interact.

If you load up Adobe Acrobat, you can draw on the PDF file on the Meenote and this is automatically filled in on the computer.

This is useful for signing contracts or filling out forms. You can also use popular note taking apps such as OneNote or Evernote.

You can read and write on anything from Microsoft Office or Google Docs.

I think this is a very interesting product. E INK has disclosed that it should retail for under $300 USD, which for a 10.3 is very

compelling. Who will bring this to market? I doubt it will be a notable brand like Amazon, Barnes and Noble, Kobo or Onyx Boox.

Instead, it is being aimed at businesses, government agencies and schools that want to cut down on paper.

From an IT prospective, it will be easy to deal with, since it doesn’t have internal components or software.

It can just tether to an established device on the network that has already been vetted and is considered secure.

This means, that the Meenote will never need to be charged, unlike tablets.