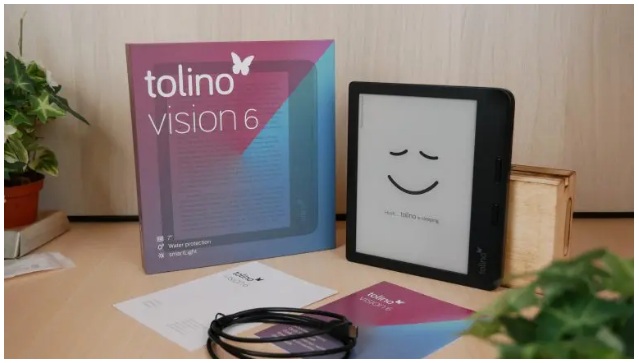 Tolino has released one new single e-reader in 2021 and it is called the Vision 6.

It is based on the same hardware as the Kobo Libra 2, so it has manual page turn

buttons. Things are quite different when it comes to some of the internals,

it is running an All-Winner Quadcore CPU processor and has double the RAM.

This is a seriously excellent ebook reader, it can tap into Thalia, Bucher.de,

with the Skoobe subscription book service.

in response time and an improvement in the contrast ratio of 15%. It has both white

and amber LED lights, to provide a warm candlelight effect. Users will be able to turn

of the manual page turn buttons.

Underneath the hood is a 1.8 GHz AllWinner B300 Quad Core processor, which allows

for faster scrolling through the eBook as well as a noticeably faster reaction of the menu.

1GB of RAM, which is double what the Libra 2 provides. Another innovation can be found

in the built-in connection. Here, the tolino Alliance is using a USB-C port for the tolino

vision 6 for the first time. It is powered by a 1,500 mAh battery, which will provide weeks

of battery life. It is rated IPX8, so it is waterproof and also has WIFI to connect up to the

internet to buy ebooks. Tolino told me that the Vision 6 has Bluetooth, they have no plans

to offer audiobooks at this time. I believe they cited the lack of research and understanding

of the audio market in the markets they operate.

Unlike Kobo, which uses Linux for all of their devices, the Vision 6 is using Android 8.1,

which is a huge jump from their older version the previous generation Vision 5.

One of the big reasons why they use Android,  is to quickly push out firmware updates,

just not for their newest devices, but also ones that came out 3-5 years ago,

which makes investing in Tolino a wise choice.

The retail packaging has a rich and vibrant color scheme, full of red, blue hues.

On the back of the box is a list of key selling features, primarily focusing on tech specs.

You can tell they put a lot of care in the design, because its actually stocked in 2,000

bookstores in Germany. Inside of the box is the e-reader, a black USB-C cable, quick

The e-reader has physical page turn buttons on the right side, but via software you can

flip the orientation 360 degrees, to read in landscape or switch it around for people who

left-handed. The overall design is slim and trim, the bezels are slim, and only protrude

where the page turn buttons are, because this is where the internal battery  is located.

The Vision 6 is only available in a handful of countries. It has widespread availability in

Germany, Switzerland, Australia, Italy, Belgium and the Netherlands and retails for for

169€. However, if you live outside of these regions, you can purchase it from Good