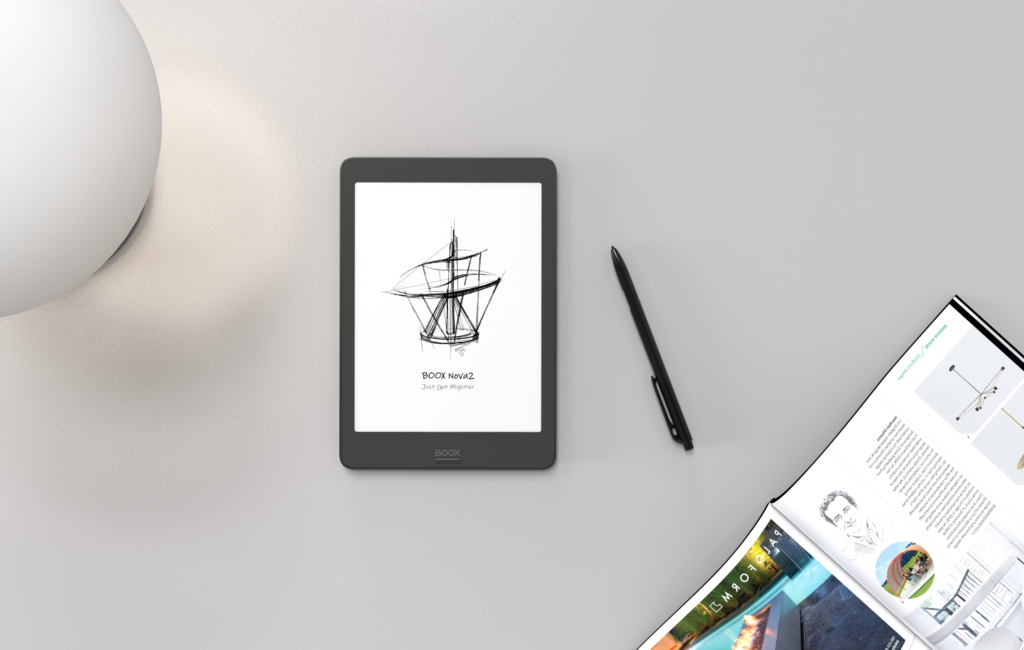 This year the big trend in the e-reader industry is color E INK. There are a few devices that are already available and everybody is working on a color device to be released later this year. In 2020 you can expect a big new product by Kobo, that is unlike anything they have released in the past. Amazon is expected to unveil a new line of Kindle e-readers and even Pocketbook is going to get into the mix, with something very special.

The COVID-19 virus has disrupted the global supply chain of e-readers and many companies are pushing back their release date. This is because most factories in China are operating at around 15% capacity and even outgoing shipments from fright carriers such as DHL are also experiencing delays.

This post will be constantly updated all year long, so you can keep checking back to get insider info on all of the new devices that will be available in 2020.

The Onyx Boox Nova 2 is the first major release of 2020 and this product is a digital note taking device that has a WACOM layer and a stylus, so you can take notes or edit PDF files. You can also read ebooks in all of the major formats. If you like installing apps, the Nova 2 is running Android 9.0 right out of the box and has Google Play.

The Poke 2 features a six inch E INK Carta HD Display with a resolution of 1072×1448 with 300 PPI. Unlike the Poke Pro, this device features a fluish screen and bezel design. It also has a front-lit display and an adjustable color temperature system for a candlelight effect.

Underneath the hood is an Octa-core 2.0 GHZ processor, 32GB of storage and 2 GB of RAM. It is powered by a 1,500 mAh battery and has a Micro USB port with OTG, so you can plug in accessories into the USB and they will work with no drivers needed. It also has WIFI 2.4 and 5HZ for blazeningly quick internet speed and also Bluetooth 4.1 for wireless accessories  and a microphone for things like Discord chat or Skype Messaging.

This device will have a six inch screen a octa-core processor, 2GB of RAM and around 32GB of internal storage. It will have Android 9.0 out of the box, so you can install apps via Google Play. The Onyx Boox Color will have a sunken bezel and it will have an E INK mode that displays content in Black and white at 300 PPI and a color mode which will display colors at 100 PPI. The specs will be similar to the recently announced Poke 2.

The Remarkable 2 improves upon the first generation model that was released a couple of years ago. It has double the processing power and RAM, two things that should enhance the performance. The battery has been increased, so instead of lasting a few days, it should continue to function for weeks. It is also cheaper and more affordable.

Mooink is a Taiwanese brand that has released a few e-readers over the year such as the MooInk and MooInk Plus. The company is gearing up for their first digital note taking device, the MooInk Pro. It will begin shipping on July 16th.

The MooInk Pro features a 10.3 inch E Ink Carta HD capacitive touchscreen display with a resolution of 1872×1404 and has 227 DPI. It does not have a front-lit or color temperature system, so you will need to make sure there is enough light in your environment to read ebooks or draw. Underneath the hood is a quad core 1.2 GHZ processor, 2GB of RAM and 32GB of internal storage. It does not have an SD card to enhance the storage further. It has WIFI, Bluetooth, NFC and is powered by a 2,000 mAh battery.

iFlytek has released a few e-readers over the years and recently dipped their toes into digital note taking devices, with the iFlytek AI Note. Details are light, but the company has developed a color e-reader that will be available soon.

The color e-reader is currently called the iFlytek Ebook and it features a 6 inch display with 300 PPI for black and white mode and 212 PPI for color. You will be able to read in the dark via their front-lit display system with 24 LED lights. It has 4,096 colors, which will make manga, comics and other materials shine, it is employing the E INK Just Print tech.

It has integrated speakers and 4 voices for their TTS engine, so it can read aloud ebooks to you. The other hardware specs like processor, RAM and internal storage is currently unknown. There is also no word on what operating system it is running, but it looks like it will be sold on JD.com and other Chinese e-commerce sites.

iReader is best known for their e-reader app for Android and the company has just announced they are working on a new color e-reader that is capable of displaying 4,096 colors and will be released on March 26th.

The iReader C6 will feature a six inch capacitive touchscreen display with 300 PPI and it is employing the new E INk Print-Color e Paper technology. It has a front-lit display system with 24 LED lights, so you will be able to read in the dark.

Underneath the hood is a quad-core high-speed processor, 1GB of RAM and 16GB of internal storage. It has integrated speakers and weighs 150 grams, is 6.9 millimeters thick, is light and comfortable, and can be held with one hand.

iReader disclosed that they have completed mass production on this device and it will be available on JD.com on March 26th. The company has developed a few different e-readers in the past, but none of them have experienced critical success. This will be the first e-reader with the next generation of color e-paper and it is very likely it will sell a lot of units. It is running Google Android, but no word if the OS is heavily skinned or if English will work, but the JD product page is now available.

Fujitsu Quaderno A5 and A4

Fujitsu is getting into digital note taking devices in Japan with the A5 and A4, which are rebranded Sony Digital Papers. They have revised the Android operating system so it is different and it does not need any apps to transfer content to and from the device, which should appeal to some.

The Quaderno A5 features a 13.3 inch E-Ink Carta screen with a resolution of 2200 x 1650 and 207 PPI. The screen is completely flush with the bezel and not only does this make the device have a premium feel, it also provides a ton of benefits. You can easily draw edge to edge, which is quite useful for people who are editing a full screen PDF file. Underneath the hood is a Marvell IAP140 64-bit Quad-core IoT Applications Processor and ARM Cortex-A53 CPU, up to 1.2GHz, and has a separate power low-power Cortex M3. It has 1GB of RAM and 16GB of internal memory, but when you power it on the first time, there is 11 GB. The rest is reserved for the Google Android operating system and some of the stock PDF templates that are available.

The Quaderno A4 features an E-Ink Carta display with a resolution of 1872×1404 with 227 PPI. It has a capacitive layer for touchscreen interactions and also one for the stylus to take notes and write on PDF files.

The screen itself doesn’t have a back or front light, and has the slightly gray background of lower-cost Kindles. The PPI is not as sharp as the standard 300-ppi display on the latest ebook readers, and you can tell that when trying to read very small text or look at maps. The 16 levels of grayscale are standard for E Ink and are fine for graphs, charts, documents or maps.

These are Japanese exclusives for now.

The Leadpie P9 features a 9.7 E Ink Carta HD display with a resolution of 1200×825. It has a capacitive touchscreen display for interactions with your fingers or hands and also a WACOM active digitizer, so you can use the accompanied stylus to draw and take notes. The stylus has 4,096 degrees of pressure sensitivity and the screen has palm rejection.

The modern Pocketbook Color is featuring E INK Just Print Color technology. Good e-Reader was live in Japan for the product unveiling to key people in the e-paper industry. There are already a few e-readers that have been released in China that use the color screen tech, but Pocketbook will be the first truly global company to market one.

The Pocketbook Color will have a six inch capacitive touchscreen display with 300 PPI screen. There will be over four thousand possible color combinations. There will be a front-lit screen, so you will be able to read in the dark. It will also have WIFI, Bluetooth and audio functionality for audiobooks and text-to-speech.

There is only so much I can say about the upcoming Kobo e-reader, although it will only be half an e-reader and half something else. I do not want to get my contacts in trouble, but remember that digital note taking app that could be unlocked with the new developer tools, think about that.

Amazon releases new e-readers every year, although adding color is about the only thing that is left to do. The Kindle Oasis 3 was the only Kindle with AMBER LED lights, that worked in conjunction with the white LED lights to give users the ability to have a color temperature system. I would surmise that Amazon will likely bring this teech to the Paperwhite later this year.

Pocketbook has plans to release a new entry level e-reader, a new color e-reader and another mid-range device later this year. They also have disclosed they are getting rid of their dedicated waterproof e-reader, since most products in their line already have waterproofing.

The Nook is normally on a 2-3 year product cycle, before they release a new device. The Nook Glowlight 7.8 only came out in 2019, so I seriously doubt they will do anything new this year. Although B&N is under new management, is no longer a publicly traded company and has a new CEO, that knows bookselling, to my knowledge the old guard in charge of the Nook are still there.

Onyx Boox released the Nova 2 a couple of weeks ago and the next device they are going to be releasing is an E INK phone, with great specs. They will likely unveil the Poke 2, MAX 3 PRO or MAX 4, and a few other devices. They will all be running Qualcomm processors and have Android 9.0 out of the box. I have also heard they are working on color E INK devices, but not what device will have it.

Boyue is having some serious cash flow problems right now and they were hit hard by the virus. The company recently moved their factory to a new location, which is resulting in bottlenecks for orders shipped out to Chinese customers and overseas distributors. I have heard no plans from them for 2020, and it doesn’t look like they will have the type of wide and varied portfolio of devices as they had in 2019. Maybe they are working on a color e-reader? Stay tuned.

Supernote has enjoyed tremendous success with their first two products, the A5 and A6. They have a wide array of digital stationery products, such as premium styli and a new line of limited edition cases. I have not heard anything about their new device plans for 2020, but so far nothing is going to be released in the first few quarters of the year. If they do unveil something new, it will likely be for Q4 2020 or even Q2 2021.

Sony bowed out of the e-reader business around five years ago and the company has focused all of their efforts on the Digital Paper product line, which is a series of digital note taking devices that focus on PDF files and freehand drawing. Sony has been developing a new 13.3 inch e-reader, but the virus has hurt their supply chain and a new device is likely going to be released sometime in the next six months.